Our Original Recommendations for The Lost Skeleton of Cadavra

Here, in 2017, the prospect of the fairy tale as the basis of horror films is a pretty common one. There are myriad films that have come out in the decade and a half since 2000 that have taken advantage of the familiar fairy tale tropes and turned them on their edge (or rather, properly, given them back their pre-existing edge) in an attempt to capitalize on them. By taking the Disney familiar and “subverting” it to apply to horror expectations , producers of these films believed that they could tap into a primal market, one that already had these particular images engrained within them.

It is a heady and bold thought: tapping into these archetypical images to distort them into serving a different purpose. Mainly, to frighten.

In this essay, I’m going to discuss two films that that came out well before the present fairy tale horror boom and that dealt with fairy tale images and archetypes. Both could be classified as “horror” films, although one is expressly horror and the other is far more experimental, yet still horrific in its nature. I’m going to give a quick synopsis of each film in question and talk about its specific fairy tale influences before moving on to the next one. 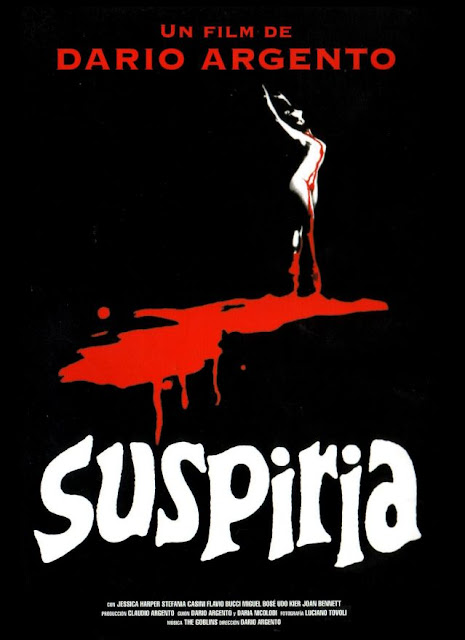 Suspira is an Italian horror movie directed in 1977 by Dario Argento. By 1977, Argento was unquestionably the master of the Italian horror genre known as the giallo, a form known for Hitchcockian suspense mysteries paired with lurid, often taboo, subject matter. Many of the gialli served as template for the American slasher film saturation of the late 1970’s and 1980’s.

But, after four very successful gialli (one in particular, Profundo Rosso, or Deep Red, considered to be one of the masterworks of the genre), Argento turned away from his roots and, with the assistance of his partner and actress Daria Nicolodi, wrote something altogether new. Taking inspiration from “Levana and Our Ladies of Sorrow” from essayist Thomas De Quincey’s 1845 collection, Surpiria de Profundis, Argento and Nicolodi concocted a story of the first of “Three Mothers”, malevolent beings responsible for all the suffering in the world.

Suzy Bannion is a young American ballerina who has gone to train at an overseas dance academy. The prestigious Tanzakademie (literally “Dance” Academy in all of its genericism) is located outside of Freiberg, deep in the heart of Germany’s Black Forest. While she is there, several students and employees are murdered or die in various gruesome and unexplained ways. Suzy finds herself becoming very weak and is forced into a nightly drugged state by the Academy’s doctor. The reasons given for this treatment, behind the scenes, away from Suzy’s hearing, are due to her “strong will”.

One of Suzy’s new friends at the Academy, Sara, begins to suspect that all is not right (it was her friend, Pat, who was one of the first to be murdered), and then disappears under suspicious circumstances. Suzy is determined to find the sinister secret of the Tanzakademie and its mysterious connection to legendary witch, Black Queen and Academy founder, the long  deceased Helena Markos. For brevity’s sake, I am leaving out a number of plot points, characters, and incidents, and this is the barest frame upon which Suspiria hangs.

Fairy tale trappings abound in this movie, some obvious, some symbolic, and some subtle.

Some of the obvious lifts here are the Black Forest location, the main character (a young woman sans family, with the exception of a faraway aunt) who is a visitor in a foreign land, a couple of evil mother figures disguised as good and helpful mother figures, various deformed or handicapped servants and a large house or palace which holds dark secrets.

Symbolism occurs throughout as well, nowhere more explicitly than in the color palette in which Argento choose to decorate and light his films. Suspira was one of the last films to be filmed in pure Technicolor, and cinematographer Luciano Tovoli removed certain filters in the process so that each individual primary color would stand out, without any blending.This was in accordance with Argent’s desire that the film emulate the color contrast and expressionistic lighting of Disney’s Snow White.

As for the subtle, the original script dealt with girls aged eight to twelve, but the prospect of the violence involved made this impossible so, although the film was cast with young twenty-somethings, efforts were made to make them appear childish and smaller than their surroundings. They squabble like grade schoolgirls and are treated with an authoritarian air in which one would never treat adults. The students are literally dwarfed by their surroundings within the school, and Argento went so far as to place all of the doorknobs on the set at head level, thus emphasizing the smallness of the characters.

What Argento accomplishes, within the confines of a supernatural horror film, was to subconsciously play with those fairy tale archetypes that are so ingrained within our psyches, that we don’t even realize that we’re seeing them. It is only with close examination that the Grimm nature of what is spooling out before us is revealed. Pre-dating Argento’s film by seven years, Jaromil Jireš’Czechoslovakian surrealist horror film, Valerie and Her Week of Wonders, is a different animal altogether from Surpiria. More of a convoluted horrific dreamscape than a straight forward horror film, Valerie comes at the tail-end of the Czech New Wave, essentially a dissention from the then current communist regime. Despite being based on a novel by surrealist Czech writer, Vítězslav Nezval , the film of Valerie is literally a checklist of Eastern European folk tale markers, each one building upon the last, resulting in a combination that can be disorienting, especially when applied beside the religious condemnation, perverse sexuality, and overwhelming sense of innocence that pervades the narrative. If you can conceivably call what occurs on the screen a coherent narrative. Rife with “is it a dream or isn’t it” moments, one can only attempt to lay out the basic plot points of Valerie, reconstructing the film into a pattern that makes sense in the telling.

The titular heroine, Valerie, has just had her first period, symbolizing her entrance into womanhood. She owns a pair of magic earrings that once belonged to her mother, long banished from the family house due to impropriety. Valerie now lives with her aged, very religious, grandmother, who is very upset to learn of the onset of her menstrual cycle. Together, they live in a small town that is beset by the plague. The town is expecting a visit from a regional bishop and his missionaries for blessing.

Valerie keeps encountering a figure. Alternately a priest/constable/vampire, the figure attempts to corrupt her by repeatedly showing her that the world is not as innocent as it seems. The constable has an assistant named Orlik who is, at first, Valerie’s suitor, and then, revealed to be her brother. The vampire is revealed to have been a former lover of the grandmother, and revives her to a youthful state using the blood of a young bride.

When the bishop arrives in town, he attempts to rape Valerie, who saves herself by swallowing one on her earrings, simulating death. The bishop then hangs himself for his perceived sin. Valerie uses her earrings to bring him back to life, in reward for which he has her burned at the stake for being a witch. Valerie again uses her magic earrings to transport herself away from the flaming stake and back to her family house.

The now youthful grandmother arrives at the house claiming to be a long lost cousin and tries to bite Valerie. The vampire says that he himself is Valerie’s father and that only her pure blood can save him from the plague and restore the grandmother’s youth permanently. Valerie’s earrings turn the vampire into a ferret and he is eventually nailed to a wall.  Her grandmother is restored to her older self. Then Valerie’s true mother and father return and are the exact image of the young grandmother and the priest. Again, brevity necessitates leaving out many scenes and instances.

Valerie and Her Week of Wonders contains, along with the surrealism, many folk story elements. Firstly, there is the motherless child, being raised by a cruel grandmother figure. There is the absent father replaced by evil surrogate fathers. The earrings are a magic talisman that can, seemingly, accomplish whatever Valerie needs. Valerie’s blossoming into womanhood precipitates everything that follows, demonstrating the danger of sex. The grandmother’s predation upon Valerie recalls the Queen/Snow White dynamic, which is also rife with sexual rivalry.

Together, these two films provide fairy tales for adults. Unencumbered by the need for morals or lessons, they instead tweak our subconscious into paying attention to things that have been embedded there since childhood.  We seek and recognize the familiar and this, in turn, serves to intensify our experiences and inform that which we take away. That we are all just children dealing with a confusing world, a world filled with dreams and horror, but, also, beauty and innocence.
Posted by Eric at 1:36 PM No comments: