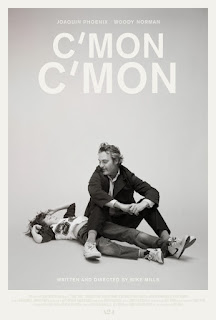 I was lucky enough to see C’Mon C’mon at the 106 year-old Paramount Theatre during this year’s Austin Film Festival. It’s a great old theatre, replete with those uncomfortable fold chair seats that have zero leg room. It sounds like I’m complaining but, really, I’m not. It’s a privilege to see anything there.

C’mon C’mon is about Johnny (Phoenix), a documentary filmmaker who is on a project that takes him to different cities to interview young people. Johnny’s sister, Viv (Hofmann), is struggling to deal with her husband’s, Paul (McNairy), bipolar disorder. The couple have a young son, Jesse (Norman) caught in the middle and Johnny agrees to take a break from filming to go to Los Angeles to watch Jesse for a while. The two are basically strangers and Johnny must find a way to get through to Jesse while they wait for Viv to come home.

The more I think about this film (I’m already three weeks out from seeing this), the more I love it. First off, the film is beautifully shot in black and white. Robbie Ryan (The Favourite, Fish Tank) has done a tremendous job here. The film is gorgeous. One of my favorite things about it are the locations. It showed me parts of New York City I’ve never seen before. Even the establishing shots of the city were different. They approached it from an angle I’d hadn’t seen. I’ve seen a lot of movies, so it was so refreshing to see New York City lovingly depicted this way.

Joaquin Phoenix will probably get an Oscar nod for his performance here. He is really fantastic as Johnny. He’s running the gamut of emotions trying to care for his young nephew. Jesse is rather precocious but also sensitive, much like the children he’s been interviewing for his project. I really bought the connection Phoenix had with Woody Norman. Wow, Norman was terrific, too. Sometimes child actors are the weak link in a movie but not here. It was good to see Gaby Hoffman again. She’s amazing as Viv. She’s got so much on her plate, it’s just overflowing. Your heart goes out to her. She stuck between leaving her husband to his own devices and staying home to take care of her child. The choice is a painful one for any parent. Hoffmann’s performance, like Phoenix and Norman, should be recognized.

It might’ve been just me, but I cried more than once during the film. I connected to it because I have a young son. He’s a few years older than Jesse, of course, but the connection was still there. It helped that Norman did an amazing job. Writer/Director Mike Mills (20th Century Women) has made a wonderful film about the relationship between families and just how difficult it is to navigate them when one member is breaking down. I loved the look of this movie. It’s also warm, funny, and emotions from all are laid bare for all to see. I especially loved the portrayal of motherhood and just how difficult a job it can be. You should definitely catch C'Mon C'Mon when you can. You'll be glad you did. 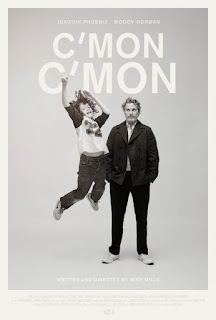 Photos courtesy of A24